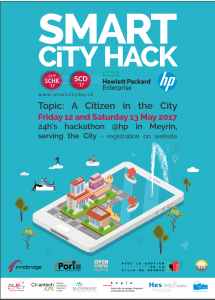 Just over a year ago, I attended a Geneva Smart City hackathon at the HP campus in Meyrin. I confess that my primary motivation for attending was to see inside the HP office, because I was curious! I brought with me a couple of Dragino LoRa expansion boards for Raspberry Pi and I pitched the project of creating an easy ‘how to’ guide for people looking to set up their own LoRa networks, mostly because it’s something I’ve wanted to do for a while and haven’t gotten round to yet – and because I think it would be very useful for many open source, open hardware, smart city projects. It turns out that The Things Network has actually made some great strides in this area since (and probably even before) – worth checking out for your LoRA projects. Nobody was interested in my pitch, so I went and joined a team of people with a problem who were looking for a solution. 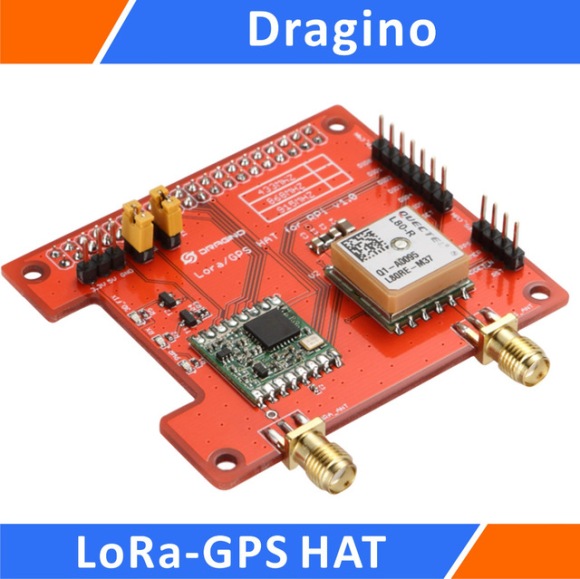 At the time the project was called Open Auto, but it’s now morphed into Comobilis. The aim of the project is simple, to build an open infrastructure for community car sharing. This particular post is about a hardware platform for community centric car sharing. It’s not a box designed to allow you to share your car with random strangers, like airbnb for cars, because I’m not convinced that’s such a great idea.

Time for some hardware!

If you’re going to share cars, you will need hardware. The main driver is a way to open and close the doors securely. This means hardware, and software. You can put the keys inside the car, you can put them behind the sun visor, you can chain them to the seat if you want. What is important is making sure that the car doesn’t need ‘undue’ modification – we’re not car hacking here (yet).

The simplest solution which works for most modern cars is to borrow the RF transciever from the keyfob. With a little bit of soldering, this can be wired up to a couple of relays to simulate a human pressing the open and close buttons. This provides a near universal interface for the car, which is as physically secure as the original key transmitter. In the future, it should also be possible to open and close the doors via CANbus, however a lot of manufacturers keep this information secret, as you could use it to steal cars rather easily.

The other required hardware items are a GPS to locate the car, and potentially track it in real-time (or check if anyone is speeding – it’s certainly possible, if not yet implemented), an RFID reader to allow the use of pre-registered tokens to trigger the door opening and closing, and an accelerometer, to allow the driver’s behaviour to be modified (it’s a great way to see if they are Driving Miss Daisy or driving like a bat out of hell).  To complete the system, we need some communications devices, including a CANbus transceiver, which can be used to read and write to the car bus (if we feel the need to) via the OBD-II port which is mandatory on all modern cars sold in Europe, a way of powering everything from the car’s 12V battery – conveniently also provided by the OBD-II port, and a means of wireless communication with the outside world.

After briefly flirting with the idea of an Orange Pi Zero and a 3G dongle, we settled on the Particle IoT ecosystem, specifically the Electron module. This provides a 3G modem and STM32 microprocessor, complete with a cellular data contract, management platform and Over-The-Air firmware upgrade capability (the last part is very useful, meaning that you don’t need to plug into each car to fix bugs or add new features).

All this hardware could be integrated, more or less onto a single printed circuit board. Here is the first attempt, complete with some assembly comments from Seeed Studio who built it: 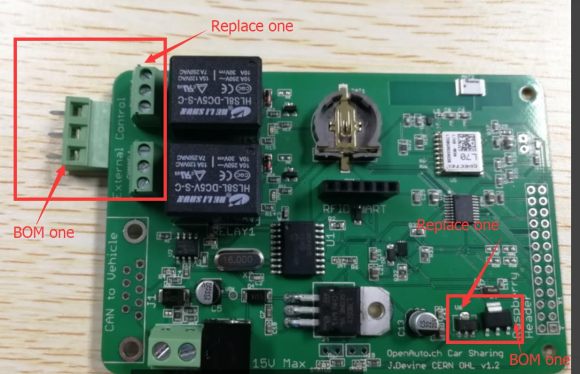 The downside of carrying round a linux box in your car is that it needs regular patches to keep it secure. These can run to tens of megabytes a month, which could be expensive on a 3G data contract. I was also concerned about the stability of the system, given the high temperatures that occur inside cars during the summer (such as today, where it’s 30 degrees outside here in Geneva and probably over 40 inside every car in the car park). The Orange Pi Zero is very cheap, however there have been some reports of thermal issues – so putting one inside a car and relying upon it to open the doors is probably not the smartest move. The PCB also had an issue with the pinout of the 5V to 3.3V level converter, which was pinned out incorretly as I didn’t read the data sheet thoughrouly enough. You can find the hardware (Eagle) for the first prototype here.

After some testing with this board (and also realising what a pain it was to prep OS cards for the Orange Pi Zeros), we decided to take things a stage further with a new design. The major flaw in the inital design was the use of an on-board GPS antenna, which failed to acquire any signals – making it rather useless. You will see that I included a footprint for an external GPS antenna on the V1.2 board as a reaction to this. 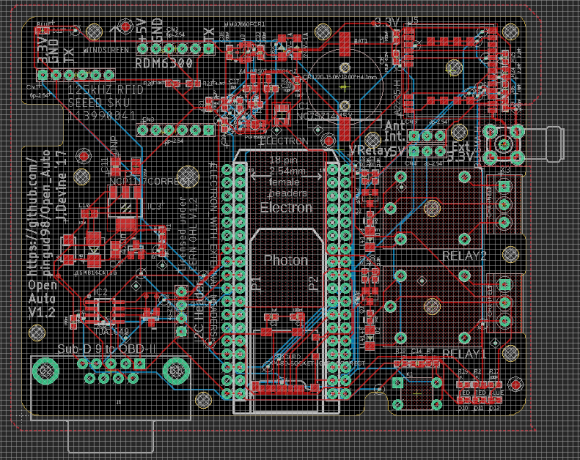 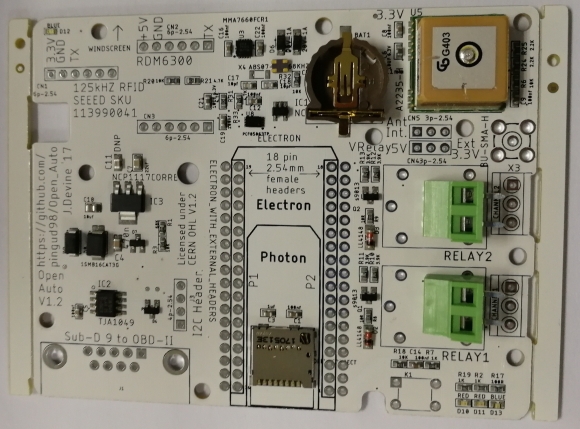 The new board was designed around the Electron and Photon modules from Particle, inspired by some work we saw from Carloop.io. The use of the Electron allowed us to power most of the board from it’s Lithium Ion battery, however in the first production run the relays (for opening the doors) were still driven by 5V – I’ve since found a 3.3V relay, and the board is equipped for this with a jumper to switch the supply, so future versions won’t need the car to be providing +12V in order to open the doors.

The Bill Of Materials (BOM) for the PCB includes everything needed to assemble the PCB, which is a relatively simple 2 sided design. There are some optional components not included such as the SMA jack for an external GPS antenna which you may want to add if this is something you are looking for. In addition to the board, you will need a CR1220 lithium cell to power the Real-Time Clock and an RFID reader module (it was designed with the 5V RDM6300 or the 3.3V SEEED SKU 113990041 module in mind, there are also several equivalent 3.3V UART RFID readers at 125kHz available from places like Sparkfun or Aliexpress.

I initially started using the board with the key fob to my own car (an old but reliable Peugeot 307), which happens to carry the key battery on the key PCB. It turns out that most other cars don’t do this, using the plastic key casing to accomodate the battery – so for these it’s possible to jumper the 3V non-rechargeable lithium cell on the board to supply the key.

For the next version, since everything was more contained, I designed a case to go around it. The case material is laser cut acrylic, since it was cheap and allowed you to see inside the box, which I think is cool! 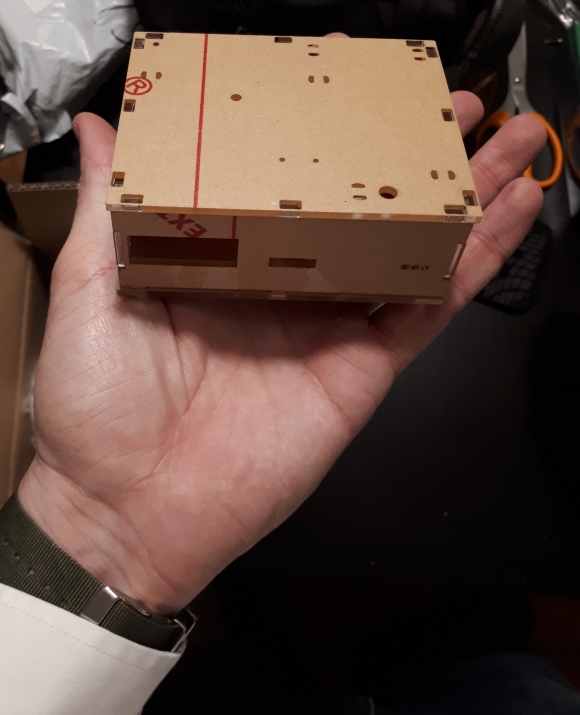 An assembled case with the brown paper still attached.

All that was left was to put it all together in the box and start writing some software. Oh and of course test the circuit board! It worked as expected, with only one small snag in the first production run – a missing connection between the I2C SDA and SCK lines from the Particle boards to the RTC and Accelerometer. 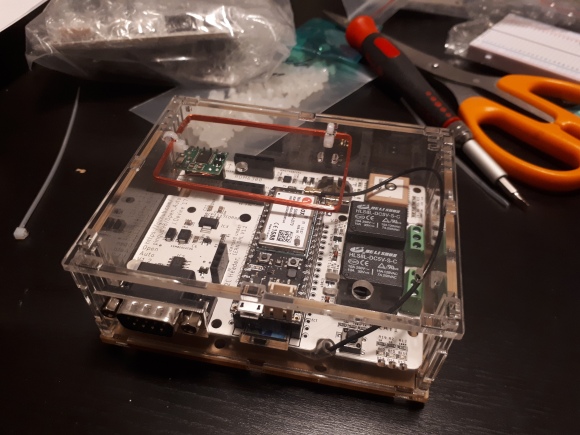 The picture above shows the completed box, fully assembled with an electron module and the RFID card reader module + antenna. In fact this configuration has since been modified to rotate the loop of the RFID antenna away from the GPS as it was causing interference. Moving the antenna totally out of the box is on the to-do list for future versions.

The design files for the Version 1.2 unit are available here, complete with the case.  The software remains a work-in-progress. The hardware is fully open, licensed under the CERN Open Hardware License V1.2. You can find a relatively recent sketch here. Of course this is only part of the solution to community car sharing, it’s necessary to have a back-end which can host reservations, billing and user information, co-ordinate with the vehicles to make sure they are in the right place at the right time and allow a way to sign up new users. The Comobilis team are using Odoo, an open source ERP and PLM platform to build free extensions to connect to the hardware and provide the necessary software and interfaces.

If you would like more information on this project please drop me a line or check out comobilis.org where you can find out about starting your own car sharing co-operative. The co-mobilis initiaive is initially focused on Switzerland, but the hardware will work anywhere there is 3G signal.

In the present I’m working on adding more functionality to the firmware, completing the way reservations are handled and retrieved to allow people to actually use the vehicles, as well as things like GPS position logging, acceleration and clock functions. In the near future I hope to look at using ESP32 + Lora as an alternative to the Particle modules, taking it closer to the project that I originally pitched! I have also started a company to sell these boxes (and some other exciting open hardware electronics) with some friends, but that will have to be the subject of another post.

Stuff I mostly talk about